[The exact source of this article is unknown, although it was probably the Lexington Echo, possibly in the early eighties.  The author is not known.  I took the pictures of the site around 1990 or so.  The house was up for sale for around 300K.  It was tempting.] 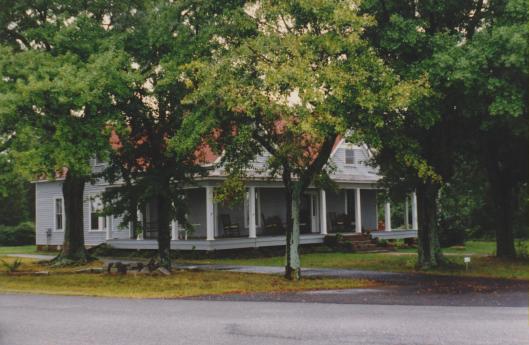 The old Whitehead Home Place in Oglethorpe County between Carlton and Lexington resembles many farm houses built in 1880 but, inside, its storied walls bear witness to the unusually straight-laced rules of conduct so strictly enforced by the builder and his wife in rearing their family.

Cena and George Whitehead designed the box-like staircase on each side of the entrance hall.  One strictly for girls – the other strictly for boys, and to ensure that never the twain should meet upstairs, a solid wall was constructed to completely separate the bedrooms of the two daughters and their visitors from those of the four sons and their spend-the-night friends.

Even though the daughters were under strict supervision at all times, their bedroom walls must have had ears attuned to lovers’ names whispered to sisters and friends who crossed their hearts not to tell because many house parties and pillow talks later, there were talks of weddings.  Daisy chose Carl Stevens, son of Joseph, a neighboring farmer and Ettie married Walter Martin, a native of Florida.

Of the sons, Theodric never married; Herbert Calvin married Elma Thornton of Elbert County; George Wiley, Jr., chose Minnie Meadows of Madison County for his wife; and Walter Everett  [the author’s father-in-law] married Luna May Stevens of Sandy Cross, daughter of Augustus Stevens.  Walter furnished the material for this story while rummaging through his attic of memories.

George Wiley Whitehead was born in 1829 and Cena Ann Mathews [daughter of Raleigh H. Mathews) in 1845.  The awkward young man first saw Cena in the little one-room log schoolhouse they both attended for a short time.  Though he was sixteen years her senior, George said right then that he was going to marry that pretty little girl when she grew up.  George fought in the Civil War and his return, with a bullet still in his head, was due to one of the miracles of the war:  wounded and left for dead on a battlefield in Virginia, Private George regained consciousness to find a Yankee officer standing over him.  He gave the Masonic sign which the officer returned.  The Blue Coat carried his wounded Masonic brother to his own camp where he was given medical attention and, as soon as George was able to travel, he was exchanged for a Yankee prisoner.

On a cold, bleak January 30, 1866, Cena married George knowing that he would never be strong.  Through the struggles and strength – sapping days of the reconstruction era, besides giving birth to seven children – one of which died in infancy – she took much of the responsibility of rearing and helping to support the family.  A large woman, possessing a dominant personality, Cena was strong in body and mind.  Her manner was stern to the point of austerity:  there was no foolishness about her.  She made rules for her children to abide by and they abided.  She dealt with everyone in open frankness, and was an ever-present help in time of trouble.

Walter was twelve years old when the home place was built and very proud of the fact that he could help his father haul the hand-dressed 8” X 6” log sills and the bark-peeled logs 8” in diameter used for sleepers.

In keeping with the custom of the 19th century, the kitchen was built away from the house with an open fireplace spacious enough to hold sticks of cordwood and a large wash pot on winter wash days.  A big cooking pot swung over the hot wood coals each day and on New Year’s Day it held hog jowl and dried black-eyed peas, to ensure good luck for the family all year.

Cena chose a dirt floor for her kitchen,

Because,” she said, “I won’t have to use the back-bending scrub brush.

(This brush was made of corn shucks fastened to a substantial hickory limb.)

Work was a dominant theme in this home.  Everybody had a job and working hours were from sunup to sundown, nevertheless, boys would be boys as one incident proves.

One of George’s chores was to drive the cows up from the pasture at night while Walter fed the mules.  One cold, blustery winter day, Walter finished feeding early, slipped into the house and covered himself with a sheet – and climbed a tree in the pasture near a log over a creek which George would have to cross, and waited.  When George was well on the log, Walter jumped out at him in ghostly apparel.  The fading light of early evening gave the exact illusion Walter desired.  George took one look, slid off the log into the water with the smoothness of a water moccasin, while Walter rolled in unconscionable laughter on the ground.  The joke wasn’t funny, and Walter’s laughter turned to tears later, when in the kitchen with mother, George stood with icicles hanging from the seat of his pants while Walter’s were being burned up.

“One job we hated,” Walter said, “was sweeping yards everyday with dogwood brooms.  Daisy and George would sweep a while and fight a while – just to break the monotony, I guess.”

Cena made her own candles until the advent of the oil lamp.  When George bought one of these new contraptions, she wouldn’t let him bring it in the house until he had tried it out for several nights on a stump in the yard.  The lamp became a necessity to the children during their scattered months of schooling in a one-room log schoolhouse nearby with its hard, backless benches where teaching encouraged soreness rather than learning.

The Whitehead parents used situations,  as they arose, to illustrate never-to-be-forgotten lessons of life.  This was one of Walter’s favorites:

I went with my father to slop the pigs every day and we had to push our way through as they crowded around our feet.  One day father emptied the contents of his bucket in the trough and walked free of hindrance back to the gate where we both watched the hungry animals ‘act like pigs!’”  Finally, my father interrupted their slurping noise, ‘Son,’ he said, ‘you thought those pigs were following me because they like me, didn’t you?  You see it was the slop I had that they were after.  Always remember, some people are like that, they follow you as long as you have something they want.’

Though they were few and far between, life had its lighter moments for the Whitehead clan.  On one such occasion, Walter and Ettie decided to play church, one of the few things with which they were familiar outside of home.  They induced Tish, a little black girl who lived on the place, to join Ettie in making up the congregation while Walter preached.  He gave his sermon all he had and Tish dutifully shouted to her heart’s content, but Ettie remained immovable.  Finally, Walter tired of his sister’s complacency and entreated,

Ettie, why don’t you shout?”  The prim little girl, sitting calmly with hands folded on her gingham – aproned lap, answered softly, “I’m just waiting for the Spirit to move me.

Walter bought the home after his mother and father passed away.  He felt the need of “This Old House,” and resolved that it would live much longer.  He took “time to fix the shingles, time to fix the floor” – he added chimneys and fireplaces in upstairs bedrooms which had been ignorant of heat during his boyhood.  Walter never forgot how his fingers grew numb on cold mornings while he was trying to cover his chilled body with warm, homespun clothes made by his mother’s industrious hands.

Mr. and Mrs. Charlie Graham lived there until a few years ago.  Charlie had been reared on an adjoining farm, and he gave the home place the same care he would have given any old, well-loved acquaintance.

In 1930, Walter enlarged the old and built new barns at the home place.  Around them he kept haystacks, standing tall like sentinels, guarding against an invasion of scarcity and want such as had once stalked this beloved and hallowed ground.

On one of these barns, Walter placed a highly – polished, granite cornerstone engraved with the name of his father and mother.  His father’s name appears also on an Oglethorpe County Courthouse plaque, as a member of the Board of Commissioners and County Surveyor when the courthouse was built in 1887.

The old landmark stands today half way between Carlton and Lexington, removed from the paved highway by a roller-coaster dirt road which boasts the longest covered bridge in Georgia.

A victim of the rural population’s steady trek to towns and cities, leaving the countryside almost as desolate as did Sherman’s march through Georgia, he house is untenanted now.  It sits like an old-fashioned, aging mother who has lost her brood but still bravely faces each new sunrise with only reminiscences of busy yesteryears, to meet empty todays.

The wide front porch which once reached out to welcome children and visitors into a lap – not of luxury but of hospitality – appears sad and lonely.

Walter passed away in 1951, leaving the home place to his son, Walter Joe Whitehead of Carlton, whose intention is to honor his father’s oft-repeated and last request, “Son, don’t ever sell the home place.”